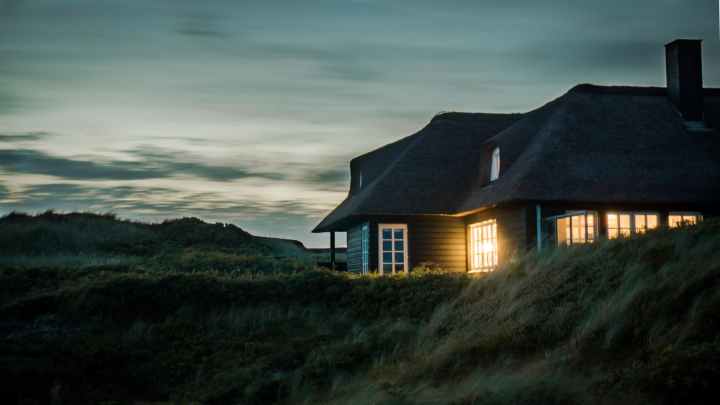 It’s not every day that a house sees a wedding, indeed many homes are built and unbuilt without ever seeing a single such occurrence in between. But to the home that does host such an event, what other festivity could possibly compare? Not only does the moment call up such lavish gaiety and decoration as to never be forgotten, but also there is no other event that could be a better consummation of all that the home represents. For what is a wedding but the embryo of family life? And what is a house, then, but the gestational womb of such embryo?

Indeed, man has long been in the practice of constructing stone and metal wombs around his varied facets of life, and invariably he communicates in the outward appearances that which is conducted within. Thus he builds a skyscraper for the conducting of sharp, calculated business, and he designs the building to be a sharp and calculated edifice, designed in ultimate efficiency with cold and compressed steel, lifting itself against its neighbors in competition for the skyline. The man seeks an structure to dedicate to all that is spiritual and shrouded, and so he builds a church, and he builds it after a mysterious and mystical pattern. Spires and domes everywhere, what functional purpose do those give to a worldly structure? Nothing, but so again prayer and fasting are not meant to give functional purpose to the worldly either. How can your temple know anything of the higher sphere if I can make perfect sense of it in my lower one? Man builds a University for learning, and he uses as his blueprint the structures of the ancient Grecian and Roman worlds. No other category of construction would be considered superior for being of a great age, but in the academic world every crack and fade is but the more revered. What care I for your degree in philosophy unless you obtained it in a structure that might have once housed Aristotle and Plato? I could continue, we have the unvarnished sterility of the hospital, the imposing invariableness of the courthouse, the sprawling reaching of the airport, the ugly isolation of the prison, the elaborate facade of the theater; but I have strayed too far from home already.

As I was beginning to say before, homes are made for the founding and developing of family, and as marriage is the core of the family, no home is more a home than when hosting a wedding. Nor was this singular significance lost in the minds that carried out the decorating and preparations of the home. Untold hours have been spent in such scrubbing and polishing that it is a wonder the walls themselves weren’t rubbed away. Not that you can hardly find an inch of naked wall anywhere beneath the strands of lightbulbs, the garlands, the laces, the banners, the paintings and photographs, all so tightly overlapping upon one another as to appear like a giant petticoat.

But come, let us take it room-by-room and give each form of adornment the examination it deserves. First we come in by the entryway, and here we are greeted by what can only be described as a shrine to flowers. It’s fortunate there is a receptionist to welcome us or we might have assumed we entered by the wrong door and stepped into the garden. Surely Dionysus never knew such a worthy offering: flowers here in metal vase and flowers there in a clay pot, flowers laying in glass case and flowers tucked in every spot. See how in this basket they have cleverly placed both rose-colored violets and violet-colored roses, and over in this vial we have a family reunion of the flora sisters: Daisy, Lily, and Petunia. I see they’ve been creating their own species as well, it would appear a marigold nestled like the pollen core into the center of crocus petals, and all perched on stalks of amaranth.

Yet for all the perfumes and fragrances produced by this floral bounty, the perceiving inhaler would not be able to ignore that there is a competitor to these flowers’ dominance of smell. Yes, there’s something else in the air, and it’s wafting from down this main hallway.

Ah, here we find the challenger’s corner in the kitchen. Whereas the entryway was buried in surfaces soft and thin, one can’t help but notice this room’s contrasting hard steel and granite slabs, all meticulously cleaned and sterilized. Wipe away every crumb if you can, it’s of no use, one snuff betrays all the dusty and spotted surfaces you must have held but an hour ago. On this counter I detect the scent of fresh bread, in this pot there remains a whiff of butter, in the oven I find the traces of both vanilla and chocolate, clearly someone spilled cinnamon on the floor here. And sugar? The aroma of that is to be found just everywhere. Stand back and take in all the pungence together and you might mistake the room as a factory for the manufacturing of girls, given the copious savor of sugar and spice and all that’s nice. But enough of the smelling, how about the tasting? Where could all these goodies have been ushered off to?… Let’s duck into the living room, that’s a likely candidate.

Yes, here they are. I don’t believe these tables were intended to support such a weight of food, they’re already starting to buckle at the center and by the end of the night may well be better shaped for use as chairs. Whichever source of sugar prefer most, I’m sure you’ll find it somewhere in this confectioner’s mountain. Have some strawberries dipped in chocolate, then chocolate éclairs topped with a vanilla sauce drizzle, and then vanilla pudding with strawberries stuck on top. One wonders that there isn’t a Neapolitan cake. Oh wait, there it is, I didn’t see it behind the pound cake and ice cream cake. After you have enough bites of cake be sure to get some cake bites, and so segue to the smaller offerings of tarts, cookies, taffies, and fruits and cheeses for fondue. If you favor a little savor and salt with your sweet we have caramelized bacon roses and sea-salted caramels and a bag of something called bacon-salt that I guess is meant to be applied judiciously to whatever you please. Come now, I believe I’ve already gained 10 pounds and I haven’t even had a bite.

Thus far we’ve dwelt on the preparations of the home, but what on the people housed within? As a general rule, weddings seem to be the events to which ill feelings and long faces are most forbidden. It truly speaks to the magnanimity of the occasion that an event which only truly benefits two individuals can still ripple goodwill and positive cheer to all attendees, though they number more than a hundred. And indeed, there is not a one of the guests to be found here today that is not succumbing to this epidemic of genuine mirth, you can see its symptoms in all the cheerful talk and warm laughter. Perhaps this phenomenon is explained in the fact that weddings afford us one of the rare opportunities to examine how the threads of our disparate lives all come together in unexpected ways, and each attendee is the embodiment of one of those individual threads that makes up the tapestry of the new couple. Thus they are permitted, nay, even expected, to show off that little bit of themselves that the whole of the honored duo might be understood:

“Yes, I knew him well, I was his football coach. There was this one time, we were down by 5 and I entrusted him with the last play of the game…”

“That’s right, she’s my sister… oh yes, of course I have all sorts of embarrassing stories to share…”

“I know he may seem so strong and solemn now, but when he was but a child in my class he betrayed a very tender heart. There was one time when the class pet was ill…”

“Ah, well, if you think she looks lovely now you should have seen how she radiated when our debate team won the nationals…”

“I should hope he’ll be able to provide, he’s got an excellent employer: me! I knew I wanted him on my team right away when in his interview he…”

“Yes, the family doctor. One time, as I was concluding a routine house call, she came to me with her decapitated doll…”

Can we express pride and admiration for the beauty of the weaving, without also admitting a pride in our own fibers that lay within it? The more the newlyweds glow brightly the more we all shine with them. And a truly radiant pairing it is this day. See the groom, tall and straight, broad shoulders that are prepared to bear much and undoubtedly soon will. His darling whispers something in his ear and his face becomes sharp and attentive, then, as he understands the joke it breaks into a handsome grin and deep, healthy laughter. He speaks back to her and it is a voice steady and purposeful, a voice that has confidence in that which it speaks. And as he speaks she pushes back a curl of her auburn hair to better lend her sympathetic ear. Her expression is one of cheerful anticipation. His comment to her does not elicit laughter, but tenderness, as evidenced by how she palms his chin and leans up to affectionately kiss his cheek. That done she bobs back down to her heels and ever so slightly leans backwards, a pose that communicates utmost comfort and calm, a stance that invites others to lean forward and bask in her smiling warmth.

Yes, this truly is the day that best epitomizes all the house represents. It is the day that it truly realizes its full purpose, the very apex of its existence. But there is a bitter-sweetness in finding a summit, for it means no following days will compare. In every symphony there is a solitary loudest note, and everything that follows seems but the duller reverberations of that one greatest moment. Then, even after all the instruments have sounded their last the air still seems to pulsate with the tone. So it was for the halls of this home, ever seeming to ring with the sounds of mirth and laughter of that one grandest day. As the place was eventually left desolate and dust collected thick on every surface it still at times seemed to be stirred by the echoes, now so low they are but the haunting of days beyond memory.

Well, there it is. That’s the result of taking my idea that needed to be cut from last Thursday’s post, and trying to flesh it out into a thing of its own. And as I discussed in my Monday blog entry, I think this was a far better solution than if I had just trashed my idea. The Caterpillars story is properly trimmed and this idea can live forever as its own thing.

Obviously this piece is entirely focused on describing the setting without any of the characters getting to speak for themselves, and I find myself curious as to what it was the newly married couple was whispering to each other at the end. We’ll start examining that on Monday as we discuss the methods for creating characters and then representing them to the reader. Have a good weekend and I’ll see you then.