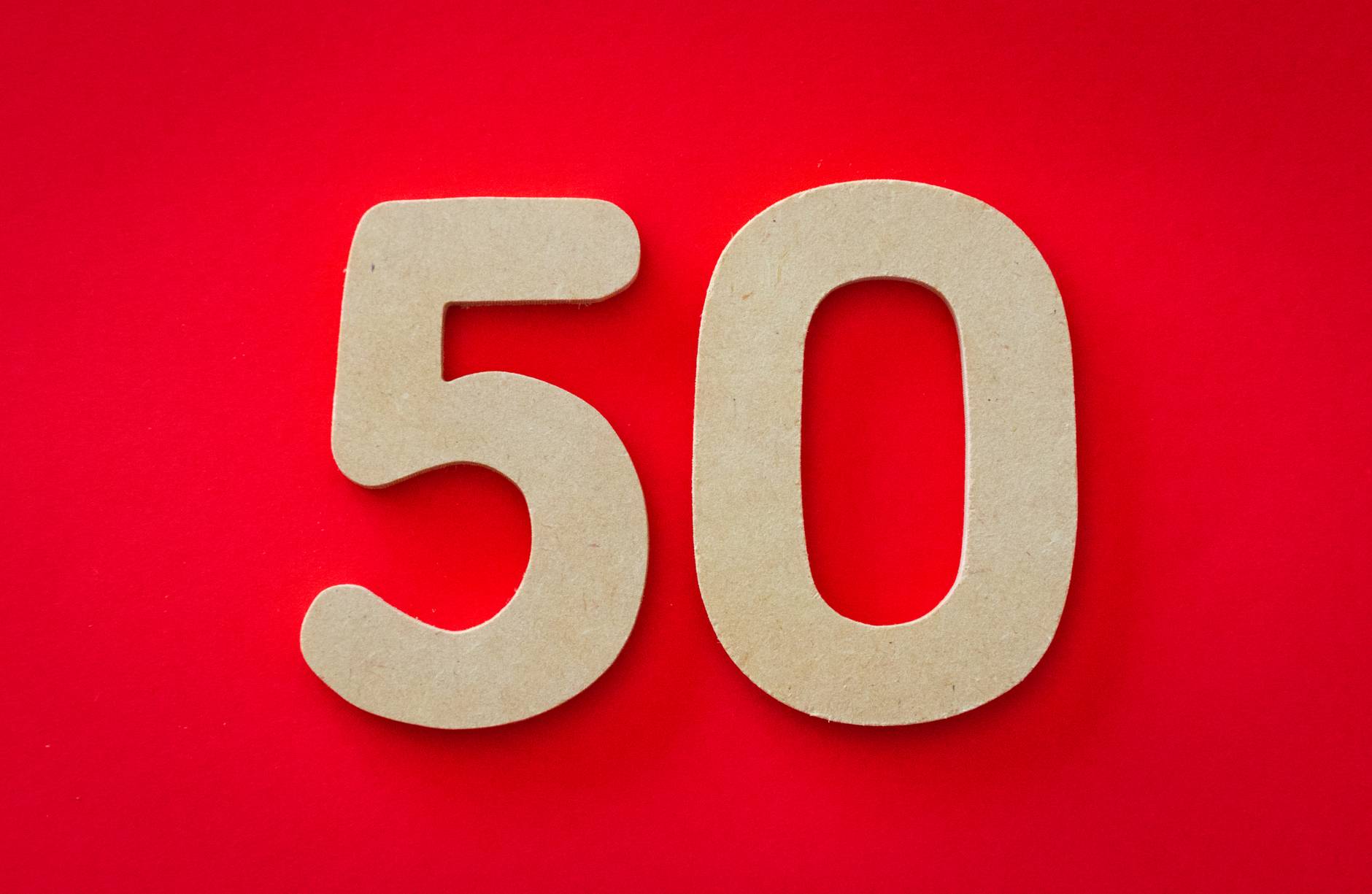 On Thursday I posted the last section of The Favored Son, which also marked the end of my most recent series.

This isn’t all, though, it also held the distinction of being the fiftieth short story that I’ve completed on this blog. Not too bad for two-and-a-half years. At this rate it will only take me a half century to post a thousand!

Though actually, that might not be quite true. The fact is my stories have been getting longer and longer at a dramatic rate. In the first year-and-a-half of this blog I did forty short stories, and in all of this last year I only did ten!

Which I don’t feel bad about, it’s just an interesting observation. Probably these longer ten-part stories are harder for readers to persevere through than the short one-offs, but the top objective of this blog has always been to just write what I want to write. If anyone else happens to like it, too, then that’s an extra gift and I am very grateful for it, but it really isn’t my driving motivation.

But back to the milestone.

So I felt it was time to commemorate this achievement, and the way I’ve chosen to do so is by ranking each of my fifty stories. From worst to best I will list out a short description of each tale, what my personal feelings about it are, and any special challenges that it presented. And these reviews are going to be very influenced by my perspective as the author. My experience while writing the story will be as important as the final quality of it when determining where it ranks.

Fifty stories is going to take a little while to cover, so I will break it out over this week and the next. My regular essays and short stories will be put on a short hiatus until after that.

And now, without further ado, let’s get to it!

It Sounded Better in My Head)

It turns out there are very few of my stories that I consider a complete flop, tales that I would feel very little reason to revisit, even if I had the time. If anything, I would just extract the few parts I do like about these stories and repurpose those into other, more promising stories.

50. Harold and Caroline. A boss and one of his workers are constantly at odds with one another.
For some reason I really struggled while writing this one, redoing multiple scenes multiple times. I think it has a more sentimental ending than it has earned, and I’ve frankly never felt so detached from a happy ending after all of the frustration it took to get there.

49. The Basketball in the Water. A man is meeting with his therapist, discussing his frustrations with his father.
It’s a nice representation of counseling, utilizing actual methods of the profession. But the entire thing was built around a twist ending that feels oddly out of place. My reason for wanting to include that twist was to be true to a dream which inspired the story. Sometimes I need to be able to let go of the initial concept of a story, though, so that it might evolve into something better.

48. Hello, World. A group of programmers inadvertently let loose a virus which strives for world domination.
I’ve included the occasional moment of humor in my stories, but this is the first and only time where I tried to write a comedy. And, given where it is ranking on this list, it might be quite a while before I try it again! I think my main issue here was trying to mix a sense of levity alongside some thick technical-speak. It made the whole piece feel off-balance and lacking a clear voice.

The next section of my stories are ones that didn’t shine as brightly as I’d hoped when written out, but which I still like the ideas at the core of. There is still potential for them, but they need a different interpretation or a fuller context to really come into their own.

47. The Sweet Bay Tree. A young tree is brought into a multi-purpose room on university campus. Slowly it comes to the realization that it will never leave this place.
I think there was an intriguing idea at the heart of this story, but the main thing I learned from the experience was the importance of finding the right medium to tell a story through. This is something that could work in a soulful song, but as a short-story it just kind of comes and goes without making the intended impact.

46. The Heart of Something Wild. An African Tribe tries to negotiate the shift of power after the old chief dies.
I feel like this story had too many core ideas: the tribe members deciding where their loyalties lied, an examination of a shamed heir, and the relationship being formed with a strange creature. Each of these could have been interesting in their own right, but the blend of them all made for a bit of a distracted concoction.

45. Shade. An altruistic leader sacrifices himself to save a friend that has fallen to the other side.
I have posted many stories that feel like a single chapter from a larger piece. But where most of them feel like they have a complete arc within that larger tale, Shade felt decidedly incomplete. There just wasn’t enough time to care about the characters involved or the events that transpired. What was described could have been an interesting piece, if it had been backed by a novel full of development.

44. I Hated You, Jimmy. A man looks back at his frustrations with a High School bully, and how he finally developed empathy for the boy.
I tried something new with this story: I made the protagonist’s voice change a great deal throughout. Though the entire piece is is couched in the setting of an adult reflecting on his childhood memories, he very much gets caught up in the emotion of the moment, and at different times sounds like a teenager, a young adult, and a mature man. This might work over a longer piece, but in the short story format it resulted in too chaotic and frequent of changes.

43. It’s Tough to Be a God. A man is exiled on a small moon, where he discovers the power to create whatever he wants.
There are a lot of ideas I really like in this. I think a simple man being made into a god and trying to balance out his own ignorant mistakes is fascinating. But the tone of it kept slipping from me. I felt like I kept pushing at the fringes of creature horror, which was not my intention at all. It’s definitely something I’d like to do another take on.

42. Celestials. A solar system is destroyed through a complex chain of events.
I feel that this story fell to the same weakness as The Sweet Bay Tree. It is an interesting idea, and one I think that is worth, it’s just very hard to communicate by a written medium. This tale is full of dense paragraphs that are brimming with chemical and physical terms. I originally envisioned this idea as a short film, and I do believe that that would provide the best experience.

41. Gifts from Daniel Bronn…and Jerry. A sentimental story about an old cynic who is transformed through his work for a rich altruist.
This was my attempt at a feel-good Christmas story like A Christmas Carol or It’s a Wonderful Life. I still very much like the idea of a man learning compassion by repeatedly being the vehicle for someone else’s kindness, but I can’t help but feel that the ending just didn’t come together in the way I had hoped. It’s not terrible, but I would like to have had the time to experiment with a few alternative versions before hitting submit.

40. Washed Down the River. A detective mystery set in the 70s, where a suburban suicide might actually be foul play.
I had wanted to write a mystery for a long while, and finally decided it was time to try my hand at it. I enjoyed the more measured approach I used, but unfortunately all that slow burn builds up to an end that is disappointingly anticlimactic. It could definitely be reworked, though, and there are many ways it could have a far more exciting conclusion than its current “so I guess no one was really the murderer?”

39. Cael: Darkness and Light. Two isolated scenes of a dark void spilling over the world, and two characters attempting to flee it.
If I were just evaluating the very first scene, I would have placed this much higher. It’s scene of a man dissolved within a void I still find quite gripping. And the second scene has its own interesting ideas as well, but as with Shade it would have had more impact if contained in a greater context. In other pieces I have better learned how to take a vertical slice from a larger tale that still feels complete on its own.

38. The Wedding Scenes. Four vignettes from a single wedding reception.
My very first story on this blog! And while writing those first pieces was pretty grueling at the time, I am actually quite pleased that it turned out as well as it did. In the end it is a bit lopsided, with certain vignettes turning out much better than the others. I could easily drop the weaker sections and just let the others stand on their own.

37. Instructions Not Included. Two boys discover some strange machines that operate on their own set of rules, separate from the laws of nature.
It was nice to write a story about pure discovery, and in that regard I consider it a success. The ending was designed to open the world up to a wealth of future possibilities, but I feel that in this case it was it felt like a hurriedly tacked-on cliffhanger, rather than a natural escalation of all that had come before.

That’s all I have room for today, come on Thursday as we’ll delve into the next sections of my countdown!